On a whim, I’ve decided to tag a v0.3 release of posh-git (which has been stable for a few months now). In this release…

Previously the setup process for posh-git was undefined. Daniel Hoelbling was kind enough to put together a getting-started post, but I decided to make it even easier. Assuming Git and PowerShell are configured correctly (see readme for details), getting started is trivial:

At this point the sample posh-git profile will be loaded as part of your PowerShell profile. If you don’t like the sample profile, feel free to grab the pieces you want and discard the rest (so you can use posh-hg too, perhaps).

Update: If you already have posh-git installed, just cd into your posh-git directory and pull from my master branch:

By taking a dependency on msysgit 1.7.1, all status information is now retrieved in a single call (git status -s -b). This still means git status is called for every prompt, so if status is slow for your repository your prompt will be slow too.

If it’s still too slow for your taste, you also have the option to set $GitPromptSettings.EnableFileStatus = $false. This will preserve branch information for the prompt, but skip everything else (counts and tab completion for added/modified/deleted files).

Finally, you can set $GitPromptSettings.Debug = $true to see how long the various steps take behind the scenes. If your environment is anything like mine, the majority of the time will be spent in git calls.

Code Review with Git Patches and Outlook via PowerShell

In the spirit of “simplest thing that works,” my team has a rather low-fidelity approach to code reviews: patch files and e-mail. Nothing fancy, but we find it works rather well. It’s even easier thanks to git format-patch, which lets me easily generate a patch per commit, but I was never able to get send-email to work quite like I wanted. Instead, I whipped together a PowerShell script in a few minutes that does just the trick:

Create patch of everything on current branch since master:

Create patch of everything except the current commit, with message:

Posted in Git, PowerShell. Tags: format-patch. Comments Off on Code Review with Git Patches and Outlook via PowerShell

I’ve been using git-svn for almost a year now, and have settled on a low-friction workflow that has been working really well. First, a few notes about how I work with Git and Subversion…

First up is the alias that stands in for svn update, to make sure I’m always working from the latest changes:

Update Nov. 30, 2010: After reports that people were having issues calling git up from master, I’ve modified the alias slightly:

If this is your first alias, the command to set the alias would be:

Step by step, this alias does the following:

The key is item #2: automating the synchronization of master and Subversion means I never have to think about it again. I can either rebase a topic branch against master to get reasonably fresh commits, or use git up to grab the latest (mostly when preparing to commit into Subversion). Without this alias, I tended to waste a fair amount of time switching back to master periodically just to make sure it’s up-to-date enough.

When do I git up?

You can use git up pretty much any time you want — on master, on a topic branch or even with a detached HEAD — as long as your working copy and index are clean. If you have work in progress but need Subversion’s latest, you can either git stash or make a temporary commit and then git reset HEAD^ after the update. I used to favor the former, but am starting to prefer the latter because I tend to be undisciplined about cleaning up stashes that git stash pop didn’t delete due to merge conflicts.

Satisfied with this abstraction for pulling changes from Subversion, I then applied the same logic to committing into Subversion:

The dci alias (short for dcommit) does the following:

Again, by automating most of what I was already doing I can be confident that I will always come out of a dcommit in a well-known, consistent state from which I can proceed without extra thought.

When do I dci?

git dci should be used when you want to commit HEAD and its uncommitted ancestors into Subversion. In my experience, this usually falls into one of three scenarios:

You have a topic branch and want to replay all of its commits into Subversion one by one. In this case, simply checkout the branch and call git dci:

I use this most often, as I prefer granular commits and a linear history.

Update Dec. 4, 2010: Donn pointed out that I gloss over my use of an lg alias, which provides a concise graph of history. The alias is described here.

The exception to my linear history preference is if the build would break between intermediate commits. For example, I might upgrade a dependency in one commit and then fix the build in the next commit. One could certainly use a squash merge or interactive rebase, but sometimes I prefer to keep the granular history in Git.

So how do we accomplish this with git-svn? Well git-svn essentially treats merge commits as the sum of their parts, relative to the previous Subversion commit — it squashes for us. To make our single Subversion commit, we’ll just switch to master and use git merge --no-ff:

The --no-ff flag forces the creation of a merge commit even though we should be able to fast-forward (if we up’d first, that is). You can make this the default behavior for master by setting branch.master.mergeoptions (I use --no-ff --no-commit).

Once we have our merge commit, we again use git dci to push all its changes into Subversion: 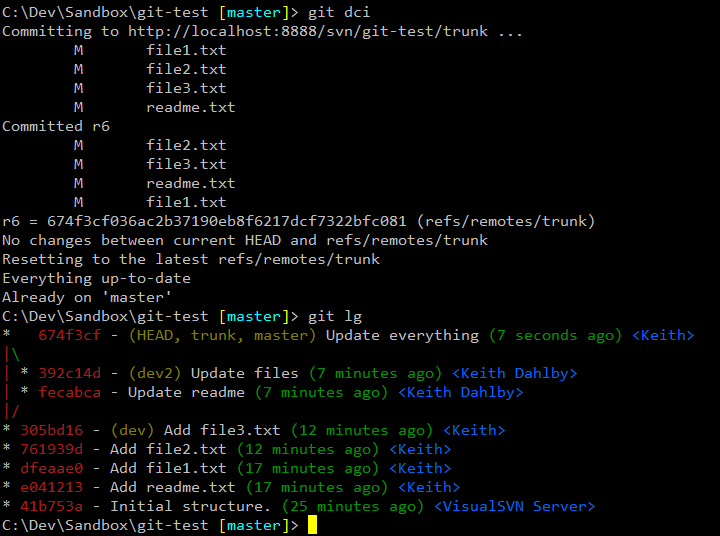 Note that the dev2 commits remain untouched by git-svn, and Subversion has the combined changes:

The final scenario is really no different from either #1 or #2, but it’s worth pointing out that you can use git dci from any HEAD, not just on a branch. For example, suppose I have a few refactoring commits that I created as part of feature work which I would like to share with the team now while I finish up the feature. In this case, I can checkout (or merge from) the last of the commits I want to share:

And git dci from the detached HEAD to save those changes:

Note that git dci left me on master. Now to continue on dev3, I just rebase against master so Git is aware that the dci’d commits have been updated with git-svn metadata:

If I want to get even more sophisticated, I could cherry-pick then dci individual commits, or I could create a copy of the branch and use interactive rebase to exclude the commits that I don’t want to dci yet. Just remember to rebase the topic branch against master when you’re done.

If you have any additional git-svn tips or questions, please let me know.

Reading through Jason’s post on using Git-Achievements with msysGit, I couldn’t help but get it working with PowerShell. The result is a single PowerShell script added to my Git-Achievements repository, tagged here on the off chance I decided to upload my achievements.

If all goes according to plan, this should unlock your first achievement.

Note that this will pass every git call through a few extra layers, including calls made for the posh-git prompt. But if you can tolerate the performance hit, it’s a rather fun way to expand your working knowledge of Git. Enjoy!

Posted in Git, PowerShell. Tags: git-achievements. Comments Off on Git-Achievements in PowerShell

I had never had any problems using msysGit with SSL until last night, when I came across the following error:

There were a number of suggestions in the comments on GitHub’s Smart HTTP post, but they mostly seemed like hacks (most common: copy file from msysGit elsewhere, or turn off http.sslverify). A much easier fix is just to set http.sslcainfo to the absolute path of the curl-ca-bundle.crt file in your msysGit install’s bin folder:

I chose to do this at the --global level so the setting won’t be overwritten by future msysGit installs.